From [N8]
Jump to navigation Jump to search

Hacking is the art of manipulating computer information to gain access to restricted areas and acquire assets. The stat that measures your hacking power is hacking rate. Some of the hacking mechanics involve the result from rolling a dice. For short representation it’s going to be written as dN where N is the amount of side the dice has (e.g d20, d100)

The hacking rate is the sum of your base hacking offense (for scout), hacking mods, crew members and guild bonus. Fastest way to increase your hacking rate till level 10 is through use of mods. After that a crew member (Hacker) is advisable. Joining a specialized guild is also a good idea.

Hacking requires 10 Processor (5 for Scouts) per attempt. You are rewarded experience and depending on the target cash, intel, cargo or mods. You can use hacking to replenish or drain shield as well as boost and drain engines. To gain more intel from a successful hack you can increase your intel bonus by using mods, recruiting a crew member (Spy) and guild bonuses.

To succeed at hacking you make an opposed d100 roll, this is to say that both you and the drone roll a random number between 1-100 and the higher number wins! Drones add 1/4 of their level to their roll. You, the player, do not. Instead you get lots of cool options like mods, co-pilots, guild upgrades, and there's another extra bonus if you're a scout.

If you're familiar with other RPG systems you might also be familiar with the concept of a 'critical fail' or 'critical success' but please note that there is no such thing when hacking. This means if you roll a 1 and they roll a 100, you can still succeed if your modifiers are large enough.

Successfully hacking a drone gives XP, Intel, and Money. The size of the reward scales with the level of the drone. At this time it seems that failure does not incur any penalty when hacking drones.

Hacking locations isn't much different from hacking drones, the main difference is that the 'level' of the hack is its modifier, we don't divide by 4 here. For that reason these hacks tend to be a bit more difficult, the advantage is that you don't have to enter a space lane to take advantage of them.

Each location is broken down into 4 different sections:

Each offers a different type of reward.

The most recent use for hacking. PvP hacking allows you to do a number of things to other players ships. The current abilities are Jettison Cargo, Boost, Drain, Boost Shield, and Drain shield. When you click 'Hack', your Hack Rating + a d20 roll attempts to beat your target's Hack Rating + d20 roll. If you succeed in beating them, you gain XP and Intel equal to the target ship's level are connected to their ship. Each action has five levels: Level 1 is the standard action is guaranteed to succeed. Action levels 2-5 cost intel to attempt, and require another hacking attempt roll. The target ship's defending hack roll is doubled as a bonus defense for each level action you attempt.

Rewards
Upon a successful PVP hack/connection to the Hacking Terminal, the player receives XP equal to the target player’s level. 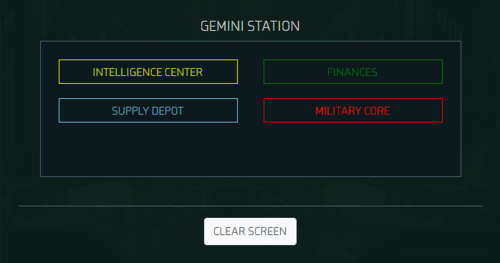 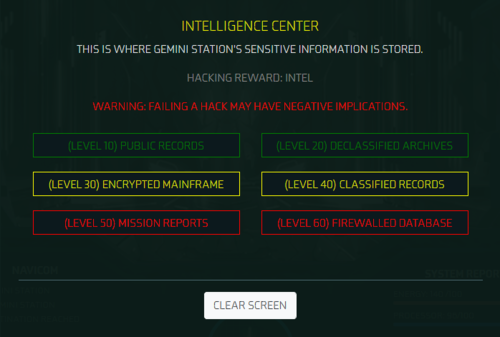 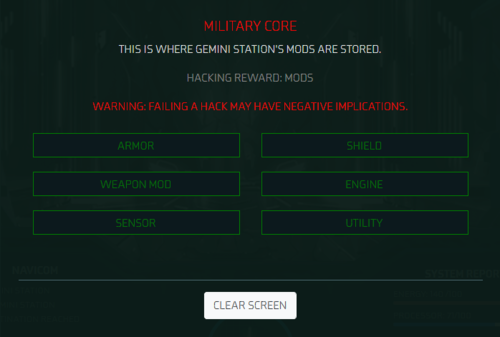 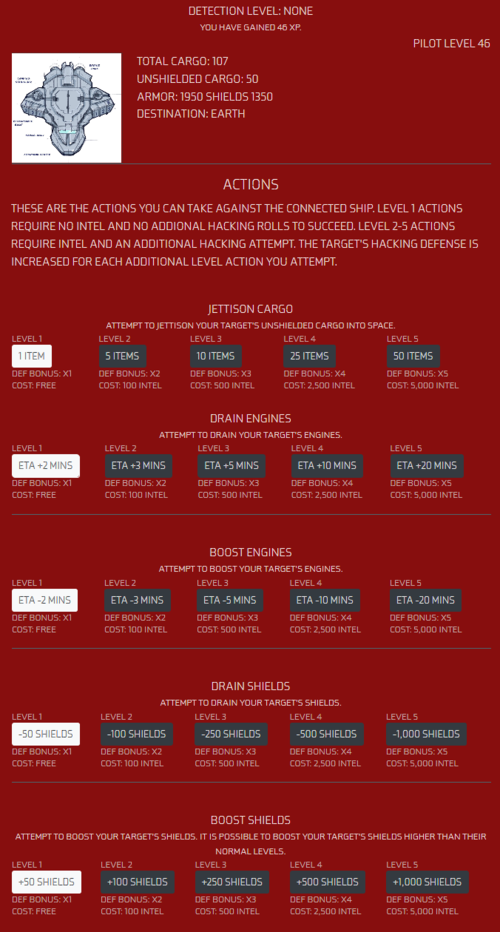 Below is a more detailed guide on Hacking which includes all their formulas aswell as an indepth view.

Note: A hacking rate of 130 guarantees successful hacking of any NPC ship up to level 60

Getting caught
If you fail a hacking attempt there is a chance you get caught and lose reputation (rep) with the faction. To get caught you need a:

The lost reputation is:

The table shows each of the 5 available actions and their effect per hacking action level.
The cost of actions is: